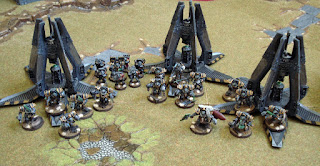 I've never really liked terminators but after spying a few of the bits and pieces and scoping ideas for this army I couldn't wait. This was the first army I've purchased as a whole and set out to build with an end goal in mind (of 8+ armies in 4 years). My local GW plays 1250 point games so I set out to build a Logan Wing that would easily fit that points level. 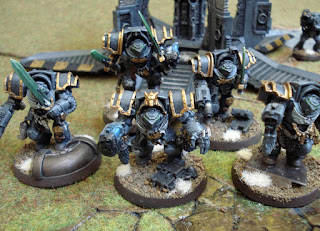 I built the Wolf Guard squads to abuse wound allocation but I won't get into that here as it would likely spark too much controversy! The drop pods were made as normal but I left out the harness mounts since 5 terminators likely would need extra room.
The terminator heads were built from standard helmets, cut down and bored out with a pin vise. These were put together before Grey Knights came out in plastic and I probably wouldn't have spent money on something I could easily build myself. You'd be suprised at how easily the terminator helmet lends itself to this simple conversion. 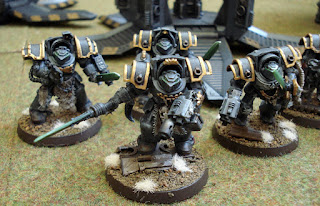 The shoulder pads here were all from MaxMini.eu which makes some pretty good conversion bits. Of all the shoulders and alternate helmets I've purchased from them (~50 shoulder pads and 20 heads) I've never had a miscast that I actually cared to fix; minor bits that look like battle damage aren't too important and only occur on 1 in 5 pieces from what I saw. They fit well with a bit of clean up and really add a unique look with minimal effort. 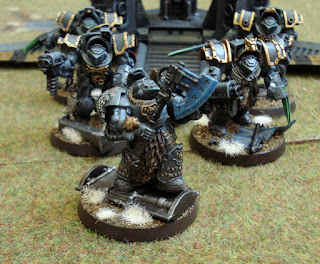 The Runepriest was built from a Scibor Miniatures body and as you can see the scale is pretty accurate. I carved up a space marine shoulder pad to create a bit of a hood, added some pelts with green stuff and was off to the races with mind bullets.

All of the marines here were quickly upscaled by adding a layer of plastic card to their feet as well as between the torso and legs. Glueing a small square to the feet, letting it dry and then carving off the excess is a great way to add 2 mm of extra height to your models. Paired with 2mm in the stomach and you can easily get a noticable height advantage over standard marines without having to carve up the model and greenstuff for hours. I think this height disparity is easily visible in the Long Fangs image between the Wolf Guard and his cohorts. 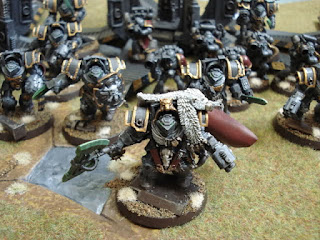 My Logan Grimnar counts-as was given a giant axe made from two frost axes, some cabling and a thunder hammer to extend the hilt. The scale is lost in the images but I assure you the breadth of the axe head is taller as a guardsman. I also magnetized his head so that I could swap in a face should he feel really couragous. 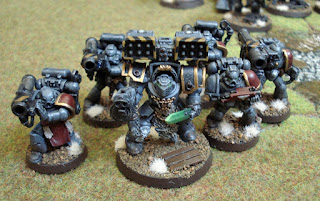 In keeping with the pre-heresy feel I tried to make all of the storm bolters have double mags to at least somewhat look like twin linked bolters. The rest were carved up and melta barrels and plasma pistols were carved to fit. I added a few bits like auspex units and duel wielding characters to break up the uniformity and no 1 model looks like another. My favourite of course is the Wolf Guard with the integrated chainfist which was inspired by ForgeWorld's Tyberos and made with a power fix, some plasticard tubing for vents and 2 IG chainswords (yes it twin bladed). 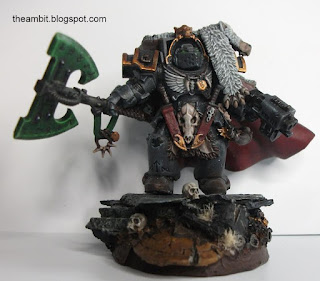 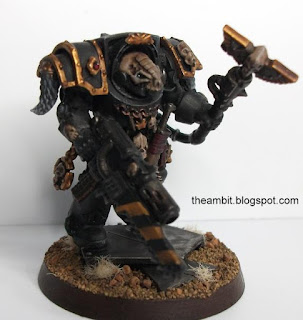 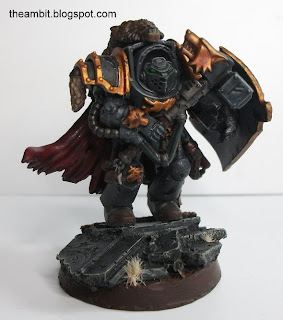 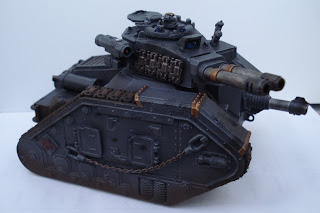 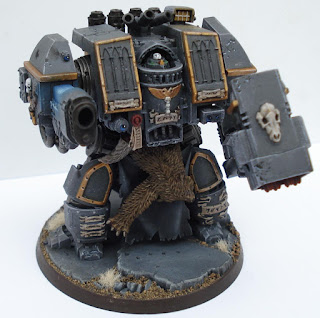 I win the roll to deploy first and set up my longfangs in the 4th floor of a building within my 12" deployment and keep all of my pods in reserve; my Raven Guard opponent sets up across from me with a rhino full of troop and a jump pack squad with Korvydae beside it hidden behind a single floor building.


Depsite his deployment I could see a single marine and the tail end of the rhino with the long fangs though of course conveying cover. I drop pod 10 marines (though these were completely insignificant as you will see).

I split fire my longfangs with 3 on the rhino and 4 on the single marine I can spy. Of the units that shot the rhino only 1 shot got through (attributed to my Wolf Guard Termie)

After this single round of shooting (my terminators didn't even fire their combi weapons) my opponent has had approximately 600 points run off the table. Needless to say the game was over at that point and I awarded my Wolf Guard a special Raven Guard decal on the underside of his base to remaind and taunt my opponent. Cried of Long Fang power aside, the whole thing boils down to a single lucky shot from one model with a missile launcher that killed a rhino and 8 marines and my opponent's terrible luck with rolling that game.