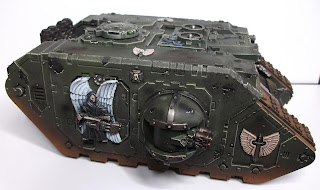 I've finished my Land Raider Achilles conversion and am super happy with it.  I can't wait to crush some enemies!  There are some work in progress (pre painting) photos here and an expanded version of the fluff below is presented here (Part 1).  There are a lot of resin bits on this guy and I used many techniques including airbrushing, dry brushing, washes, blending, sponging and weathering powders to tie it all together.  I'm a pretty dark painter but am making an attempt with my last few things to brighten up my models a bit (not the main model but the bells and whistles) so I hope it's working.
Responding to a distress call on M37.142, two squads from the 3rd company and a supporting Argonought of the Night Hawks Chapter set down on Truvel XI. The Adeptus Mechanicus maintain a forgeworld in the Truvel system which contains many planets classified as dead worlds. After four expeditionary fleets from the Mechanicum had vanished on Truvel XI, the Night Hawks were summoned for aid. 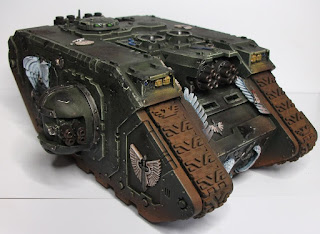 The Night Hawks quickly scoured the desert planet searching for the lost explorer vessels and came upon what could only be described as the prow of a ship extruding from the planet's surface. As they approached, the ground began to shake as defense systems activated and metalic men rose from beneath. Comms failed and the air was filled with the roar of gunfire. Surrounded by a legion of cybernetic constructs with no where to run, the fate of the battle brothers seemed all but assured. 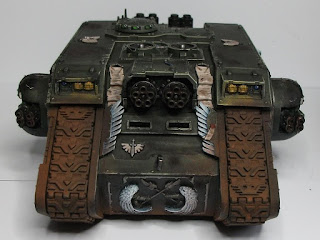 Rallying under sergeant Arkavius, the men positioned their bikes to use as cover and quickly formed a defensive position amid the barren wastes. Aided by punishing blows from their Argonaught's typhoon launder and replenished by supplies contained therein, the Marines held on. 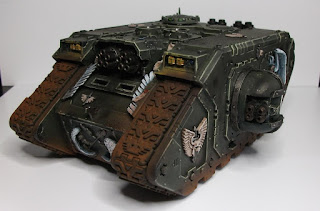 The sound of empty clips begain to ring out as the last "Iron-man" slumped to the ground. The vox crackled and hails were finally received. Mechanicum ships quickly arrived to collect the damaged cybernetics for study. The ship was later identified as millenia old human technology, priceless in the eyes of the Adepts of Mars. What use it was to them is unknown, but in gratitude for the heavy losses suffered on Truvel XI and the archaotech recovered, the Truvel forgeworld dispatched a Land Raider Achilles to Korak Prime; a true testament to the bond between Mars and the Night Hawks. 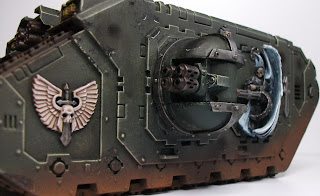 The venerable Achilles was not a thoughtless prize but a well considered gift. The Night Hawk's combat doctrine was well known to the Mechanicum as was their lack of tactical dreadnought armour and by extension, need for standard land raiders. As such, the Achilles, which is ill-suited to carry assault teams to battle hosts a thunderfire cannon, a symbolic weapon of the tech marines of the Adeptus Astartes. The weapon's tremor round's ability to disrupt enemy movement synergizes perfectly with the Night Hawks' practice of out manouvering their enemy. Permitting this oft-stationary weapon to be taken into battle by the fast moving Night Hawks on a nigh indestructible shrine chassis solidified the bond between Mars and Chapter, of whom both would call on one another innumerable times in the future.
Conversion Night Hawks Painting Warhammer 40k