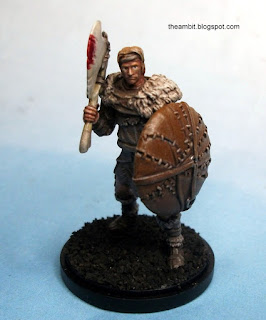 Prologue if you missed it. The group departed in silence, focused on the trials to come. Although en-mass, the survivors were wrapped in cloth with little more than and a handful of darts between them, the group was emboldened by the massive bone axe wielded by their rawhide-clad champion.

Shortly beyond the ambient light of their lantern hoard, stumbled into a pool of fresh urine before slipping into a wide crevasse. He came to rest awkwardly on his leg with a snap. He vowed he would persevere and with gritted teeth he hauled himself out and continued on with his fellows. As they crested a hill, 's leg gave out and he tumbled to the base of the hill where his opposite leg broke the fall. As he wiped the tears from his eyes with bloody hands, he spotted their quarry; it lay playfully on its back tossing a large orange fruit into the air beneath the overhang of a gnarled tree.

The survivors carefully made their way to the tall grass near the lion, having to stop briefly as spotted a large mound and without warning, plunged his arm in to the elbow. He laughed silently as he savagely ingested the fist full of hissing cockroaches he'd prized from within.

Once they'd recovered, raised her head and threw a dart clear over the creature. She took a deep breath and tried again, the dart bouncing harmlessly off the monster's thick hide. Her third attempt bore results and the lion rose only to meet Zahra's axe. Her blow was batted aside with ease. Swing after swing was parried before the cat lost interest and ultimately darted away, rolling onto its side.

The survivors prepared themselves and tossed her last dart. Nothing vital was hit but the animal's attention refocused and it bounded toward her with bloodthirsty intent. She tried frantically to hide within the tall grass but the monster was not fooled. It chomped down hard before rolling over to resume its frisky game with her severed head.

The sight was too much for 's cracked mind and he lurched on ruined legs toward the lion, seemingly reaching for its stomach. The lion lashed out at the distraction, disembowelling with one leg and snapping his back with the other before returning to its plaything.

The axe-wielding champion and her companion descended upon the monster with all of their fury. It proved too little as the lion bashed the survivors to the ground before casually tearing them limb from limb.

When the hunting party failed to return, a scout was sent to determine their fate. She found little more than pieces of discarded equipment, some still containing limbs and organs. She hurriedly returned to the settlement with everything she could scavenge.

Seeing scarcely enough for the settlement to eat in the scout's arms, the dwindling populace collectively swore vengeance as bright lights passed through the sky above and endless screams howled around the settlement.