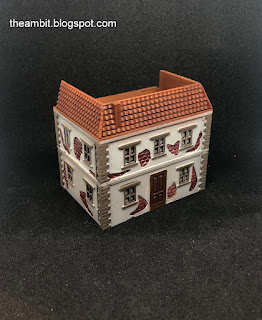 I finished the last of my Company of Heroes terrain - the 9 houses (standard buildings?) and the 8 ruins (destroyed buildings) from the Terrain Pack. I may do the objectives later and some tanks but not right now.

I did the base coat with my airbrush and some wych flesh but discovered that my airbrush head was SUPER clogged. It took two hours to realize this, clean everything and get the painting done; but at least it's a smooth coat. Brushing that on would take forever. I also didn't go overboard on detail, I just did a single coat for the bricks and windows (red and browns) and didn't bother with any shading. I just didn't care that much. For the roofs though, I did to a coat of bestial brown, some spots of khorne red and then dry brushed blazing orange. It's just enough for visual interest but not so much that I had to spend more than an evening getting the terrain done. These aren't intended to be display quality so it's "good enough" without driving me bonkers. 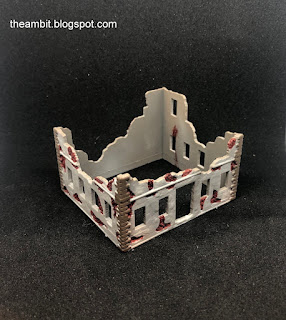 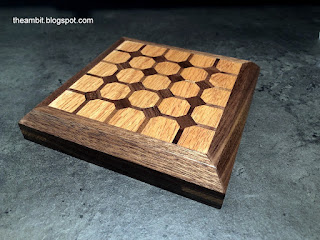 A while back I posted my quarto game pieces here  and those fit nicely with this game board. I quite enjoy the simplicity of that game, and more so the game "Tak". I wanted to make a nice game board that would work with both games so I set out to make a cutting board. I mean game board. You can see from the first image, that I essentially made a tiny cutting board. I salvaged some oak scrap I'd been hoarding for a long time and and because I didn't have much, the pieces were very thin. I added some walnut strips in between. Once that was glued up, I cut the 'board' into strips, and re-glued it with additional walnut strips to make a grid. Once that was dried, I glued the 'board' to a flat piece of walnut to give it more thickness (and strength). Then I squared it up. At this stage, I had a 5x5 grid, but I wanted something that marked the board as a 4x4 as well, for quarto. To do this, I drilled holes at each intersection and then used a chisel to make 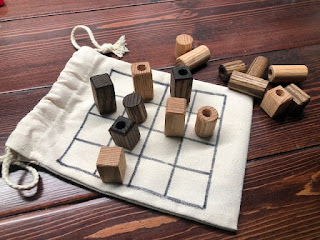 I decided to make my own Quarto boards; one for me and one as a gift. The rules are pretty straight forward and a bit different than most similar games (I'll group it with tik-tac-toe and Tak). In this game, you choose which piece your opponent places on the board and the goal is to get 4 pieces in a line that share a common characteristic (tall/short; dark/light; square/round; hollow/solid). That's it! I had been hoarding a piece of oak in my garage for many years (just a small piece of scrap) and decided to learn some techniques. I've never ripped boards down to custom sizes before, so given that this was a 1x3" board (0.75 nominal thickness) I cut 3 strips 3/4" wide. Then, to make the round ones, I had to make my own dowel. I watched a neat youtube video on how to do this; basically use a router to cut 1/4" rounds on all four sides. Then I drilled a screw into one end and hammered a nail into the other, attached my drill to the screw and spun the dowel a 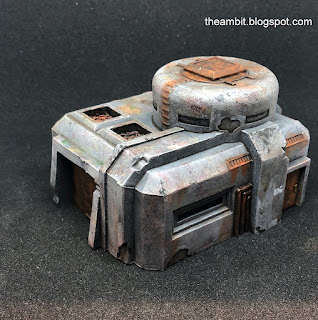 I picked up the Company of Heroes Board Game and it's been pretty fun so far. It has tons of terrain and I've started to paint it. Less tell more show. I primed them grey and stippled on a bunch of random colours including red, tans, green and browns, then drybrushed lighter grey on top and washed it in devlan mud. The rust spots were done initially with tin bitz followed by an orange acrylic drybrush, generously in some spots. I also added some metal chain link I had to the two ports on top. I think those spots were intended to hold troops or dice but the fit was bad and they looked too plain anyway. I hit point die should still fit in there regardless. Next up some battlefield defences. 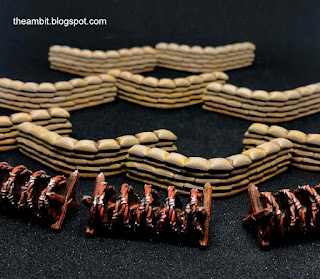 Next up for Company of Heroes, I painted the battlefield defences, including the sandbags, barbed wire and tank traps. I didn't want to spend much time on these so I quickly did them over a couple episodes of a show I'm watching. The rust is simply tin bitz, generous application of orange, devlan mud and then some more orange and mithril silver on the sharp parts. The sandbags are a basecoat of bubonic brown, then a rakarth flesh drybrush followed by gryphonne sepia and then some brown drybrush near the bottoms. Ready to protect some troops! 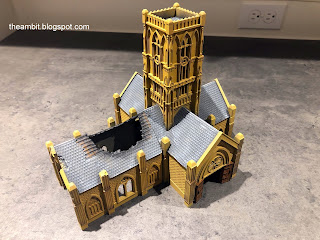 Company of Heroes Board Game Cathedral and Emplacements Painted

Continuing with my terrain for Company of Heroes, I painted up the cathedral, the emplacements and the weapons. For the cathedral I kept it simple and airbrushed quickly, some vomit brown and bestial brown on top. I added some minor wash to the pillars, added some brown to the doors and that's about it. I didn't want to spend countless hours on this so just a quick paint job.  For the emplacements I spent a bit more time and picked out details and drybrushed and washed everything. The weapons themselves (I painted all 30) were a quick coat of green (charadan granite), a light green drybrush and a black wash. I don't intend to put any of this in a displace case so I tried to keep to an evening paint job.

I wanted to try out something new (wavy patterns) so I decided to try it on some crib boards; which would basically just be a cutting board with holes in it. To start, I cut and planed a walnut plank down to size and then used a bandsaw to cut a wavy pattern in the board. I then glued a thin piece of wood between the boards and glued it up. After it dried, I did this two more times using maple and walnut (darker) than the board itself for some subtle transition.  I find most things are worth  making multiples since the time is in the setup and measuring so cutting a 2nd is always quick. Once the boards were dry, I planed them flat again and then added a chamfer around the outside. Adding the cribbage holes was a pain and not enjoyable. Hundreds of holes... I scaled a template down to fit on the boards (not the other way around) and then started drilling. Sadly because it was scaled down, a few of the holes moved due to either grain pattern or the laminated wood and then merged with a n 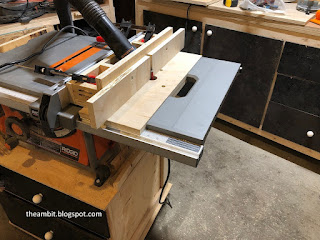 On account of all the distancing, I haven't been doing any at home gaming so no new models to paint. I have been upping my wood working though. I'm posting this not as a detailed tutorial but more to show that it is possible. I'm not a woodworker (yet?) so my terminology may be all wrong; sorry. I picked up a router a while back with a mountable base (and a separate plunger base) and wanted to mount it to something. I looked around, and there are router tables for sale but I didn't like the price or the size. My entire workshop is also my garage that I use to park in. With my vehicle, I have about 3" of space at the front, rear and passenger side. So clearly space is a premium and I didn't want to take more up with a router table or dedicated stand. I looked online a lot and there were quite a few table saw - router stands but usually for bigger table saws which are probably more robust. I have a Ridgid R45171 - a 10" compact/portable one. I wasn't 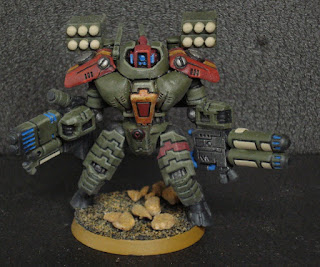 Here's my take on Shas'O Kais from DoW.  It took quite a few bits to kit bash but luckily they're mostly stealthsuits which no one uses anyway! Here are some digital instructions on how to build one:  Link This was one of the first conversions I did and you can tell how old it is by the bad paint job.  Eitherway I'd suggest trying it out yourself as it was pretty cool and he stands out as a commander among the rest of your suits.

My friends and I started with Blood Bowl when it was re-released but our little 'league' petered out pretty quickly since the games too way too long once you factored in learning new rules, and socializing. I saw someone post rules for Blood Bowl 7s and quickly saw how much better they were. I've played a few games in the last couple months under that rule set and I can say that for us, it is a vastly superior game. Less turns, less players, less spaces on the board, ultimately means the game takes 1/2 as long for us. Sure there may be less 'depth' since you can't develop long term plays, but each game I've played ranked in the most fun we've had playing the game. Because of this, I wanted a proper pitch (instead of just saying "don't use those squares" on my other board). I had this printed up by a fabric printing company on some thick neoprene and the detail looks great (image for the pitch is free online and about 4000 pixels so it sca