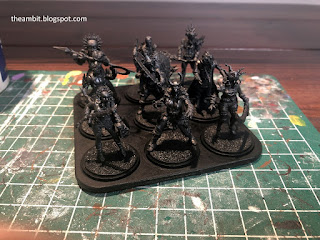 Continuing on with updating my sunstalker showdown, I decided to make some survivor models from all of my spare sprues to paint black. I'm hoping these 9 are enough for MOST of the time. If we let too many spawn it won't end well. I also wanted them to have another unique aspect so I used the masks/helms from the mask maker, lion knight and the king's man.

All of my other models are on scenic bases but I went with the basic on these and added some water effect similar to my sunstalker and slenderman. That way, if anyone has blotted out and an even half similar load out, they can use one of these models too. Because of that I tried to make a bunch of different load outs weapon-wise.

Paintwise, they're chaos black with a zenithal of a bluegrey followed by a light drybrush. I put some black wash on a few. It's hard to really pick up the colours on the photo as it's way too subtle. Really just enough so that if questioned in person I can say "NO! They're not just primed, look closer!" :)

Everyone is unique and I got to use up lots of models I doubt I'd have ever made otherwise. Then I added a bunch of water effect to the storage tray. 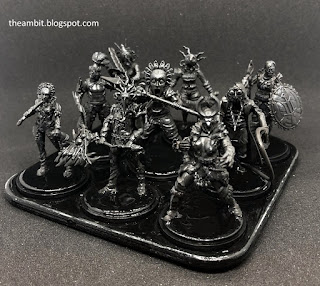