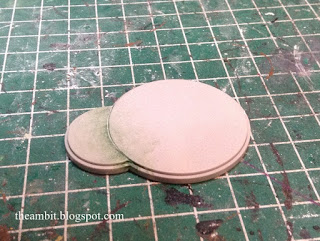 Having now played the spedicules encounter, we realized (or accepted) that the model itself is too unwieldy for table top play. The way the monster works is that blindspot is beneath the model and you are essentially in its 'shadow'. He doesn't have a base and I couldn't think up a nicer way to do this that was functional (the monster moves a lot and you can essentially stand on it) so I took a 50mm base and a 30 mm base and made a spider shadow that as a base has the same 'lines' as the rest of the survivors and monsters so it fits in visually (as best as it can I guess). I'll prime it black for play and call it a day! The bulb on the front represents its facing for ease of use.
Conversion Kingdom Death