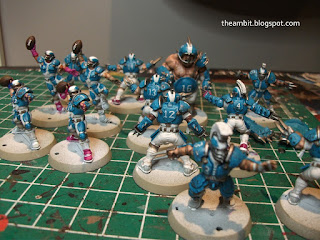 The metals here are all done and the armour received some sponging of charadon granite for chipping. I've added player numbers to everyone as well. I didn't want to use decals since they would look too clean. I decided to just use freehand and add them to a shoulder pad, their backs and a chest guard. I went with a numbering system;
1 - 2: throwers
3 - 6: blitzers
7 - 10: catchers (2 unused numbers)
9 - 15: linemen (3 unused numbers)
16 - ogre
The overlapping numbers allow for down the road to add more players if I need to and allow for player injuries. The rest of the numbers are allotted based on the max of each position that can be on a team. Toys need structure!

I went back and repainted the plumage which originally was white. It didn't stand out enough so I used ice blue as a base to darken them. Now they're subtle but distinct from the linemen. I also added eyes to the throwers and catchers and any final touches before basing them. 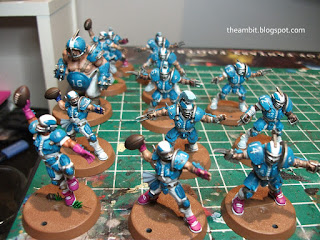