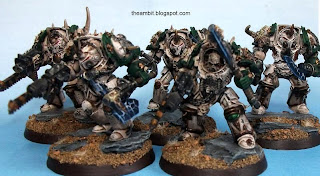 While those strong of character may rise to become lords, those strong of purpose can be sidetracked by such single-mindedness.  Among the Emerald Fist traitors, those who fully embraced the touch of Nurgle and fought for prominence among their peers were granted the gift of tactical dreadnought armour.  The terminator armour fashioned by the Dark Mechanicus on Juro IV is a gross interpretation of the STC and appears to encourage integration of its wearer's flesh with the outer shell.  Once encased within the battle plate, the wearer quickly begins to bond with the ceremite; warping its plates and penetrating breaches with warped flesh.  Although the armour appears compromised by disrepair, plasma burns and bleeding metal, the hulking mass is all but impossible to stop with anything short of antitank weaponry.