May 08, 2013
The Schism of the Fists was not limited to line astartes. Neither Lexicani nor codicier, fused with the tainted geneseed, were immune to those blighted events. Although they may have held out longer than their comrades, secluding themselves to rigorous meditation to ward off the pressing tide of corruption, the young librarians inevitably ceded to Roscius as their battle brothers died around them. Once removed from the shackles of the Librarius’ edicts designed to protect those wielding the powers of the warp, the traitors were free to delve into the rotting wonder of the Lord of Decay. Most of these new sorcerers had not yet steeled their minds to such power and perished or worse, devolved into gibbering masses of flesh spawn. Few, such as Morteus, harnessed this power to their will. With but a look Morteus infects his victims and wracks their flesh. The sharing of his gifts with all those he sets his gaze upon has become his only impetus. Those who earn his attention are rewarded with a death experienced throughout a lifetime in a state between worlds; neither in the material world nor the immaterium, his victims suffer for an eternity at the blink of an eye before crumbling to dust at his feet. Large swaths of the population of Bruj were inevitably cursed to fates worse than death by his hand. 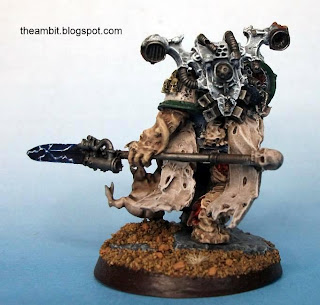 I wanted this model to look like a former librarian and not simply a marine who became a sorcerer after pledging to chaos.  To fit in with my Emerald Fists, I also didn't want an overly stark contrast which would have happened if I'd gone with the typical dark blue.  To combat this I base coated with a mix of space wolf grey and adeptus battle grey.  He was then painted with space wolf grey, washed in black and dry brushed with space wolf grey and skull white.  Standing with the rest of the army he looks like he belongs yet stands out.  This model is really cool and the amount of little details is nice.  I'm always happy to paint forge world models and this was no exception.  From the armour damage and gaping wounds to all of the little nurglings following him around and nestled in his armour, there are a lot of little features to look at.  I'm glad I picked this model up as the forge world paint job is pretty brutal on their website and almost turned me away.  I was a bit suprised actually as their gallery is usually top notch. 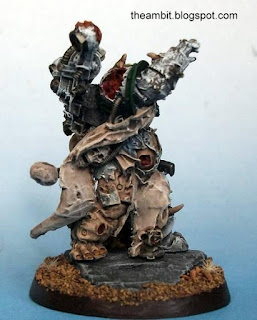 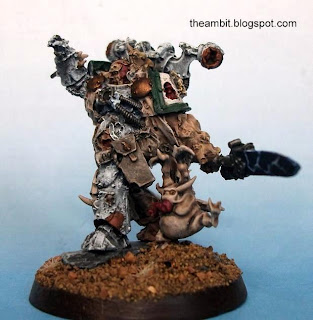