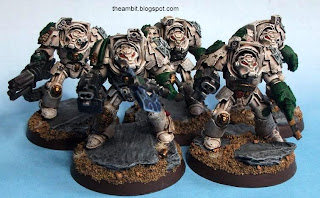 I finished my tactical terminators this weekend.  I like the subtle change the forge world shoulder pads add.  The Fist iconography is sweet.  I also added some etched brass.  You can see small fists on the knee pads and head of the power axe which were added with the brass.  I went with the classic stone colour for the crux as well since painting it metal would have added too much bling to the chapter which I don't want to be too fancy. 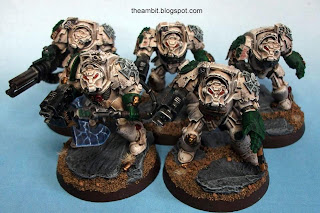 When painting the power axe I attempted to blend and drybrush an edge and it turned out terribly.  I retried 3 times before attempting lightning for the first time.  To complete that, I painted mordian blue followed by a black wash then painted 4 successively brighter highlights on the lightning pattern followed by a blue wash.  I touched it up with skull white and that's it.  I don't really like the static lightning look but it was necessitated by my inability to blend.  I'll take the same approach on my nurgle terminator counterparts to these guys which are 50% done right now.  The fists were done similarly to the lightning to give a marbled pattern just replacing the blues with greens and not highlighting up to skull white.  I stopped at scorpion green.
Now to write some background for these folks!
Emerald Fists Warhammer 40k