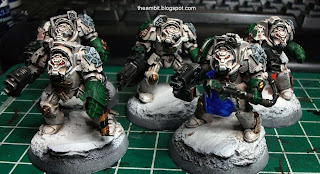 I'm currently finishing up my loyal tactical terminators.  I set aside the 5 nurgle ones I was working on because 10 became too much of a burden when the paint schemes started to diverge.  They were doing well when it was base armour colours and such but everything else was too different.  I figured I'd finish up the easier ones (less detail = easier) so here the tactical squad is nearing completion.  All that I think is left (I'll do another look over) is the power axe and the basing then these guys will be ready to kill.  I'm putting serious thought into a command tank which has an improved teleport homer I think it would be really nifty to use these guys in that role.
Emerald Fists Warhammer 40k