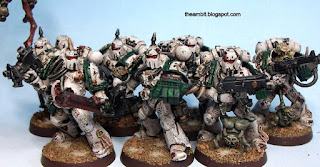 A thought struck me this morning and I'm looking for outside opinions.  I'm wondering what the most optimal build for a plague marine squad is.  I should mention that I am never limited by FOC slots for troops with a nurgle army so that is not a concern.

I'm thinking that dividing my forces into smaller units increases their survivability (rhino saturation) and minimises the negative effect of a rhino wreck.  Squad size is irrelevant for leadership tests since they're fearless and getting locked in a bad assault is less bad when the squad is smaller; my unit can also die faster (hopefully) so that I can shoot whatever unit assaulted me.  For assaults I want to be in, I can divert 2 units of 5 instead of the 1 of seven.  I'm also gaining extra special weapons, an extra wound, a character, a rhino, and a scoring unit.

Are there any negatives to this thought process aside from losing the nurgle number 7 and adding two kill points (which doesn't concern me)?  I know a lot of people who don't like rhinos anymore but I'm still a big fan.
Army List Nurgle Warhammer 40k