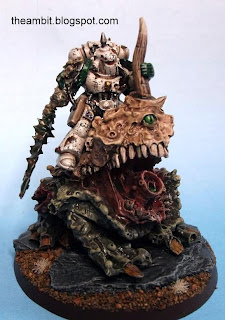 I finished painting this guy last week but couldn't find my camera.  Now that I found it (in my army bag) I wanted to share it.  The lord can be removed so that I can run the frog as something else if need be.  The lord himself is just a simple smash together of plague bearer arm, forge world bits and biker legs.

The traitor elements of the Emerald Fists are led by lords of rot. Although the majority of the traitors were recent members of the Fists who had not yet rose in rank, those battle brothers who were implanted with defective geneseed first and possessed of exceptional natural ability soon became sergeants of their own squads. These traitors are rare yet so is their prowess in battle. These exceptional marines who would have been destined for great things among their loyal chapter have risen to prominence among the traitors. Marked with the boons of their patron god and innate ability they reap unimaginable carnage across the worlds of the Imperium. Serving as the daemon prince Roscius' lieutenants, lord Rothos and lord Kurnex bring their master's will to the mortal realm. 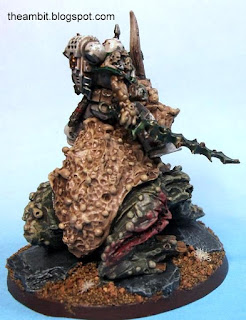 Once the putrid essence of nurgle had infected the Emerald Fists the traitors sought out demonic pacts among the denizens of the warp. All manner of beast would be summoned to the world set to rot beneath the treads of the Fists. Innumerable pestilent creatures have been recorded in the service of nurgle; foremost among the Fist's charges being toad-like beasts towering over even the astartes and more than twice the width. With a speed unfitting of such beasts these daemons bound across the battlefield clawing and spitting bile on all caught in their path. Lord Rothos has even been described as taking one of the abominations into battle as a mount; though corroboration of these anecdotes is thin as is all hyperbole among the raving lunatic survivors of an Emerald Fist attack. 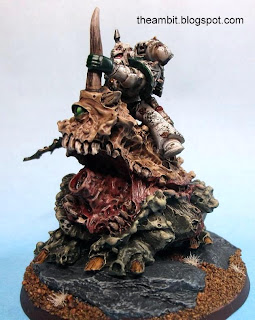