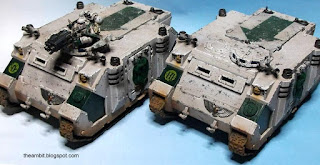 I finished painting my two Emerald Fist rhinos today!  The doors are all on magnets, the top hatch comes off as do the copulas.  These will be fully usable as predators and razorbacks once I paint the extra bits.  I'm pretty eager to use these in a game!  I'm planning to sell the existing vehicles (8 or so blood angel vehicles) and start from scratch making them all fists. 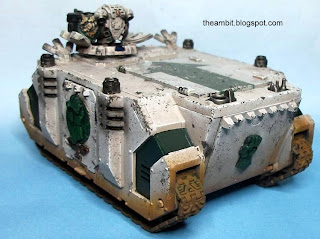 I picked out a bunch of areas with green so that the models weren't giant blocks of cream.  I didn't want to go overboard and I think I chose the right amount.  The top hatch looked really bland so I did my first tactical arrow.  I took green painting tape and taped off the shape I wanted and then airbrushed it.  I removed the tape right away but there was a bit of bleeding.  As I'd sealed the hatch first, a wet q-tip removed the bleed.  I then sponged the original cream white over the arrow followed by the granite that is on the rest of the rhino to make it appear weathered. 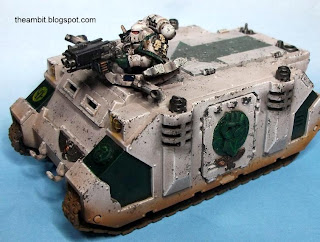 The only thing I'm debating is whether I should have paint chips in the rest of the green areas on the sides or would that just take away from the model itself? 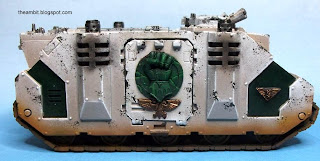 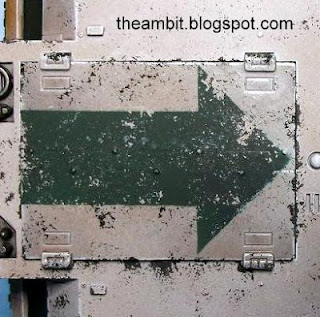