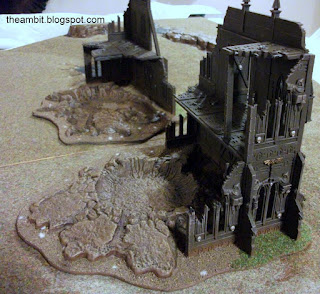 My first two pieces of terrain ruins are now complete!  I honestly can't believe how little static grass comes in the citadel case for $10...  I really only bought it to colour match my game board but apparently the scorched grass blister isn't the same colour as the scorched grass in the basing kit...  Anyway enough negatives.  As you can see they're fairly plain so they shouldn't be the focal point of the table (that's what the armies are for) but still looks nice.  I have two more pieces waiting to be primes and I ordered a Shrine of the Aquila and two Citadel Wood pieces.  It's taken me years to realize that I should have made a nice table long ago.  As simple as they are, I think these two ruins are the most satisfying 'models' I've completed in a very long time. 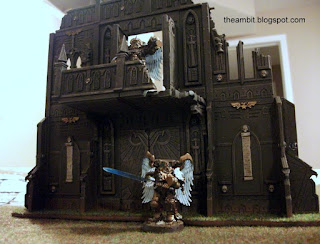 I've also included a couple staged action shots to show a few angles of the ruins with my sanguinary guard.  Poor unit doesn't get on the table except for photo ops haha.  Now that they're finished I'm wondering if I should put any water effects in the craters but I'm worried it might just ruin them or be 'too much'.  The two ruins I have up next are going to be the same colour.  Initially I'd painted my terrain (really badly) in different colours to represent the different building types (administratum etc.) but it looks crazy and didn't have a good theme.  I think having them all this dark brown will tie the whole table together.  It also blends in well with my basing scheme. 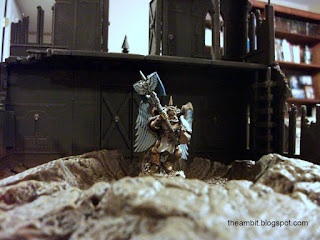