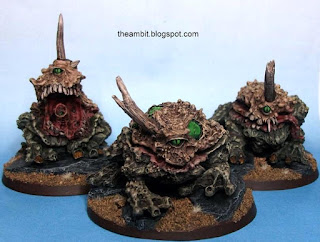 So I'm hoping this post gets me to 50,000 hits since I started posting about 14 months ago which is a cool milestone.

I was motivated by a guy at my local GW store to try running a nurgle lord on a bike with a unit of nugle spawn and it worked really really well so it inspired me to paint these guys up over the last week.  They were a blast to paint and I'm super happy with how they turned out. 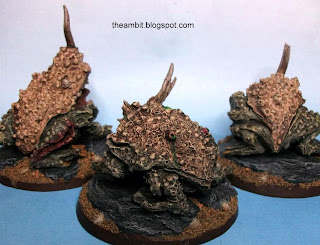 The green is a basecoat of orkhide shade followed by catachan green from above followed by a rotting flesh drybrush, devlan mud wash and a dhenab stone drybrush.  The tan skin was done with talaran flesh, elf flesh, devlan mud then dhenab stone.  I wanted a more pastel colour tone to fit in with the rest of the marines they'll be with so that they didn't stand out too bad.  The mouths were painted with machite red, a talarn flesh drybrush and dhenab stone.  To really add a focal point I painted the eyes up from ork flesh to scorpion green.

The other interesting thing to point out is all of the bases are the same 60 mm base just positioned at different rotations so that they didn't all look the same.  I'm going to write up some fluff for them and also add the nugle lord rider to the painting queue (he can be removed so that these can function as mutilators/spawn/oblits as the army list requires. 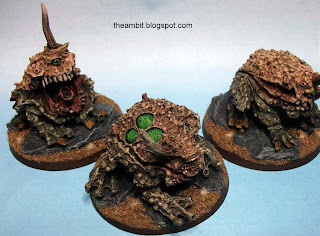 My favourite part about all of these are the two gross tubes coming out of the back of one of them which are dripping green puss (see the second picture).
Emerald Fists Nurgle Painting Warhammer 40k