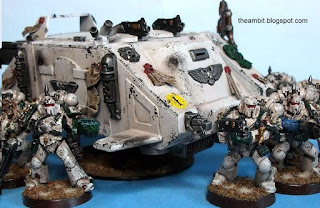 I finished my hover rhino today.  I figured it was about time that at least one of my plague marine squads had a legit ride that wasn't just gray.  The defiler I was working on is getting close to finished as well.  It will also work (as designed) for my loyalist forces as a command rhino.  The nurgle guys just won't argue with a new ride. 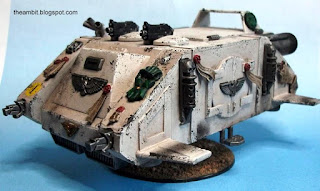 The Mark IA Hover Rhino was created near the end of the Great Crusade by applying anti-grav technology discovered by Arkhan Land; a technology more common to the Land Speeder which bears his name.  The Hover Rhino did not enter widespread service due to problems with the reliability of its engines.  For a vehicle whose prominence was owed partly to its machine spirit's resilience, the However Rhino's inability to match its predecessor's stubbornness was its ultimate downfall.  Although prone to breakdown, its unique design allowed it to reach greater speeds and traverse terrain not approachable by typical APCs.  This reason, paired with limited production numbers, saw the Hover Rhino issued primarily to command squads among the legions. 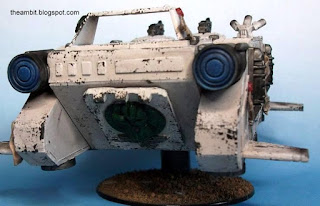 The relic shown here was passed from the Imperial Fists to the Emerald Fists at their founding and was looted by traitor forces during the Schism of the Fists.  The temperamental machine spirit renowned among these vehicles has been appeased by the warband's warp smiths though undoubtedly unconventional means. 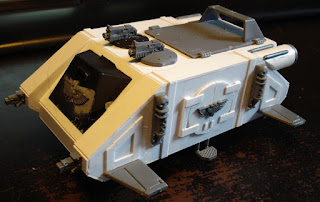