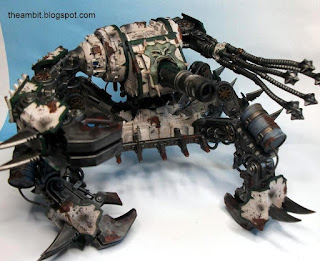 One of the things I look forward to with the Christmas holidays is the increase in free time I have to sit down and paint.  I'm pretty slow since I usually watch tv or movies while I'm painting which is quite distracting.  Anyway a few movies later and quite a few episodes of boardwalk empire and I've finished my defiler.  Originally the oil drums were a dark mordian blue but I found it contrasted far too strongly with the white and drew the eye to something that wasn't really that important.  I decided to address this by muting the colours with a grey-blue and I think it worked.  They still stick out as a detail but not THE detail. 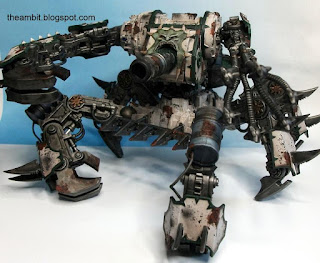 This is also the first larger model that I've applied the GW texture paint to to simulate rust (I've done it to my plague marines albeit on a smaller scale).  I really like the raised texture features it adds where otherwise it would be smooth.  This defiler obviously hasn't been rusting for very long.  I assume it has recently been rolled out by the Dark Mechanicus and given to the Emerald Fists to secure some sort of dark pact between the two.  Given time it will no doubt warp into a plague hulk.  I should also mention that the idea for the canisters came from the papanurgle forums from a sweet conversion I saw there. 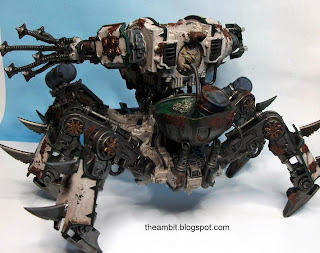 I really wanted to have more than just a paint scheme to tie the model into my army but not being a sculptor I couldn't begin to attempt to add pustules which are a common sight on nurgle things.  Though really I'm not convinced the metal should have cancerous wounds anyway; at least not on this model.  So I added a vat of bile to the rear from an old cat toy, tossed in a drum of something obviously toxic and some floating corpse heads which have congealed into a screaming homage to nurgle's blessing. 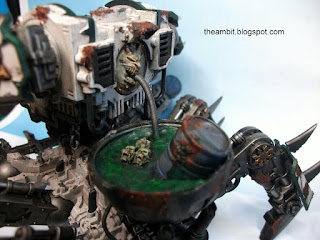 I've run him in three games so far and I must say the will probably be the last competative games I use it in.  200+ points for armour 12 just doesn't cut it.  Basically it directly competes with two vindicators which are just far better for the points in every way I can think of.  For an army that revolves around durability AV12 is an obvious weak link in the chain.  When my army (as I run it currently) has little in the way of models due to the cost to nurgle mark everything, having an AV 12 vehicle survive alone isn't realistic and I don't like flushing 200 points.  I'll probably run these as hellbrutes since the only real downside is the size and more difficult to obtain cover save so it's fair.
Conversion Emerald Fists Nurgle Warhammer 40k