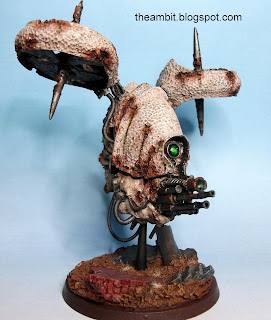 I finished painting everything on this model a few days ago.  I love it!  Can't wait to start working on the second one.  I'm really enjoying painting rust and the weathering on this stuff - such a huge difference from clean marines.  I've posted a few different angles to give a 360 view.  The next one will have a slightly greener 'slug' underneath to provide contrast between the two models.  I'm also going to pick out different parts of rust and maybe make it a slight bit more dirty so that the two of them don't look like identical twins which would be pretty boring on the table. 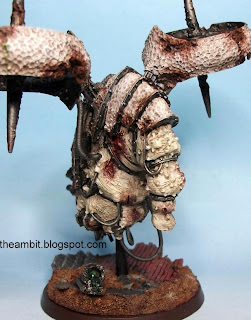 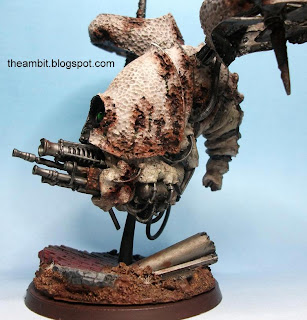 Reports of Emerald Fist forces fighting alongside the forces of chaos rarely involve tales of full scale daemonic incursion; for tales of this magnitude do not leave the sanity of the few survivors to whisper them. Far more common are descriptions of strange mechanical beasts flying support or walking among the Fists. Of particular note are the flying constructs known as blight drones. These foul machines can be heard approaching with a sound akin to a swarm of flies. A large mass of flesh protected by thick armour plating is held aloft by two rotors. Whether this merger of armour and flesh is spawned directly from the warp or hammered into existance by Emerald Fists' warp smiths aboard their fleet vessels is unknown. A popular suspision among the Ordo Malleus is that of fatally wounded marines giving themselves fully to the corruption of the warp and becoming engorged with unknown plagues; destined to live on and spread rot and suffering from their bloated selves.
Emerald Fists Nurgle Painting Warhammer 40k