The new power of ordnance/blasts 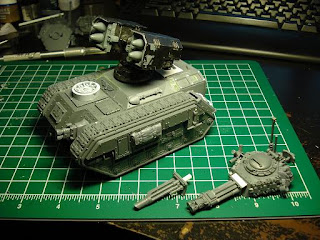 I wanted to share what I learned today.  I played 3 1000 point games against CSM, SM and orks and the new rules for ordnance/blast not suffering partials is a huge boost.  I ran a manticore and against the SM player, I barraged a pred and rhino and destroyed them on turn 1 with the same shot and against the ork player I killed 2 battlewagons turn 1 with the same manticore.

Sure this is some bit of luck and poor deployment by the opponent but this would have had far less chance of happening in 5th.  Now even when scattering the strength 10 hitting side armour with 2d6 choose highest is huge.  I don't think there is any competition for that heavy support slot anymore.  Especially as an ally, for around 320 points you can get a manticore and 30 guardsmen to protect all of your forces.  This is huge.  Even without upgrades to the guys this many bodies and a meat screen offers a huge boost to marines especially.

I also think the vindicator will be coming back a bit.  Pair all of this with the ability to place your own terrain you can almost ensure you have a good place to hide it.

Anyway moral of the story, be afraid of the manticore and the fact that IG allies are just great!

I'm going to sell off a lot of my guard but keep some infantry and some heavies to use as allies.  They just mesh and compliment the rest of the marines they're with.

The image above is an in progress manticore of mine and all that's left is the missile itself.  After today's games I'm going to have to put real kill markings on the side.  1 ork and 1 ravenguard since it basically won the 1000 point game on turn 1 both times.
Warhammer 40k