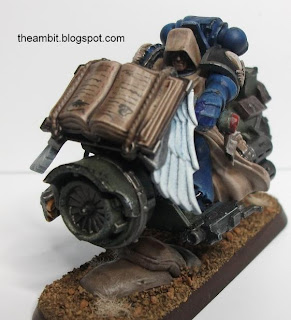 My librarian on a bike is complete.  This was the first jetbike I put together and this guy was reworked a couple times.  The first try had a home-made psychic hood from a shoulder pad that never looked right to me.  I ended up removing that and using a grey knight pack instead.  I also changed up the shoulder pad once I found the forgeworld one from sevrin loth.  The staff on this guy is from a terminator librarian. 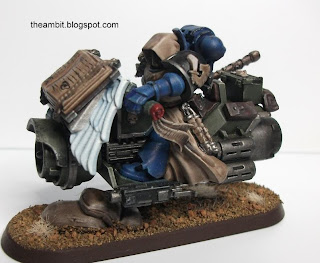 I'm not really sure about using this guy in games.  It's really hard to fit in a second HQ choice when the first biker captain costs so much and delivers so little in a bike army.  I realise you have to take one to make bikes troops but that's all he really offers.  Space marine captains are just so terrible.  Alternatively I could take the librarian and put the bikes as fast choices but then my troops have to walk or take rhinos and when I play these guys I want everything to have 24" movement.  Sadly the land speeder storm isn't dedicated for some reason I can't imagine.  Maybe next codex that will change.  I've played 3 games since completing this guy and each army starts with him leading it and then cuts him for something more necessary.  I'll have to commit to shoe horning him in there at some point I guess. 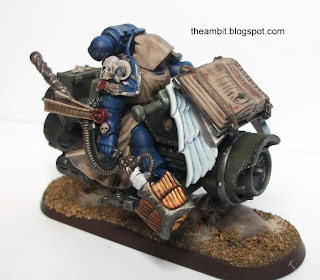 Librarians within the Night Hawks chapter are as prevalent as in any other and are an important force in battling the enemies of the Imperium.  The Librarius holds a place of special office in the Night Hawks chapter and its higher ranking members are often granted Mars-Pattern jetbikes.  The librarians spend much of their time in deep meditation divining the ebb and flow of the warp to predict where the Night Hawks will be needed most.  Aligning themselves as receptors to the wind of fate is not a process easily undone and many librarians are struck with painful visions while deployed.  The battle brother will awake from a trance with strands of fate written within their tomes and no memory of the incident.  It is common for librarians to display this journal of their visions at the forefront of their charge to battle to dispel any thoughts that they are anything but the drivers of their own fate.
Conversion Night Hawks Warhammer 40k