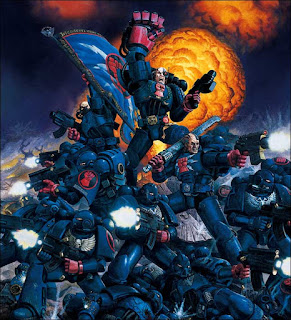 Yup, I'm starting another army!  I  have my Night Hawks for fast attack items (bikes and speeders), my Loganwing for elites and my Blood Angels for an armoured company.  Now, I really need foot troops.

I've got a start so far, some tactical and assault marines in simple green, mail order conversion parts and plans.  Most importantly, plans!

I've got Crimson Fist metal shoulder pads in the mail, tactical marine shoulders and death watch pads.  I've greenstuffed my devestator pads and will cast some assault marine shoulders that I'll cast.  That gets shoulders out of the way.

The Deatwatch marines will serve as sternguard and the rest fill in the blanks.  I've got some forgeworld heavy weapons in the mail and plan to magnetize all of my tactical heavy weapon guys so that they can swap their shoulder mount out.  My devestators will likely just get set weapons (a plasma team and a missile launcher team for now).

Of course I won't run this more than once as I change my army every single time I play, but I think having a goal is something helpful to motivate painting and this will be it.  The hammer terminators will be my custodians that I haven't ever finished but I just did a second coat of gold last night!