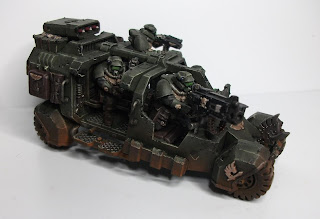 I finially finished this. I want to thank everyone for the suggestions they gave on the model itself. I ended up dumping the guy that originally was hanging off the side and I removed the rear wheels and replaced them with the full on armour encasement. It made it look more bulky and functional.

I still have a second one of these 75% built to finish, but I need to aquire more wheel wells first. 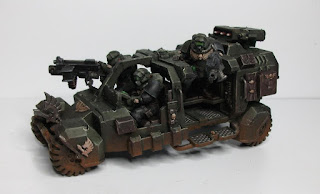 Scouts of the Night Hawks 9th company are not born in the saddle; they must first earn the right to take to battle on their own bike. Those proving themselves in the blood of combat move up the ranks to either piloting a Storm or being granted a scout bike while remaining in the 9th. For all of the reasons that the Argonaut Pattern Land Speeder has become a staple in the chapter, so has the Argonaut Storm. The Argonaut Storm sports increased engine capacity versus the standard Argonaut to aid in pushing its larger chassis up to similar speeds. 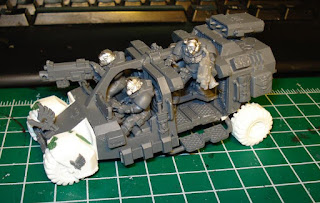 The vehicle is capable of carrying novitiates into battle as well as wounded brother-soldiers from it. Tow lines can be extended from the roof of the crew compartment which safely trail behind the vehicle for use in towing damaged equipment back from the front when required. The heavy reliance on Argonauts and bikes by the Night Hawks means that no equipment is forfieited lightly. The plume of dust left in the wake of the tri-thrusters pay homage to the coming storm and the namesake of the vehicle.
Conversion Night Hawks Nurgle Warhammer 40k