I sat down, inspired to finish this this weekend.  A lot of NCAA basketball to watch also helped :).  These guys will likely be counts-as thunderhammer/stormshield terminators in most games though they could likely count as whatever I want since they have a bolter (or halbred for GK).  The gold was painted on a tan primer using GW shining gold.  A few coats of that with an airbrush then a few washes of gryphonne sepia.  After that I drybrushed mithril silver over the top. 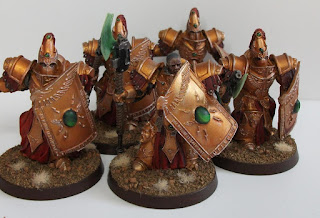 The models themselves are Scibor torsos and shields paired with shoulderpads from MaxMini and halbreds from Chapterhouse.  The arms are of course GW terminator and GK kits.  All in all I pulled together 4 model makers to form them.  Really fun to put together and to paint which is always a plus.  The chapterhouse halbreds are pretty flimsy so to connect them to the GW arms I had to chop them up significantly and pin the shafts to the arm and shaft to the bolter.  I dropped one (well my better half did) about a foot and one broke anyway.  They look nice would have been better constructed from metal. 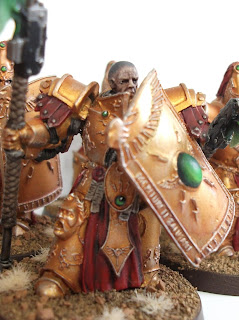 Here's the squad leader in all his glory.  After I seal these and matt varnish them I'll go back and put another coat of gloss on the shield gems to make them pop.  Modelwise I s hould point out that these guys are huge.  They tower over GW marines and terminators.  I should have put a scale photo but forgot.  Oh well!  I'm really happy with how this guy's face turned out.  I painted tallarn flesh over the whole head, then devlan mud.  After that I overbrushed tallarn flesh again followed by a highlight of elf flesh on all of the highpoints like nose, cheeks and forhead.  I follow this up with another devlan wash in recesses of the ears, mouth and under the eyes.  The eyes are astronomicon grey and chaos black.  I don't like white eyes as they're too bright and look unnatural.  The hair used adeptus battlegrey drybrushed on followed by a stipple of chaos black .  Colours and such inspired by FTW tutorials with some artistic license. 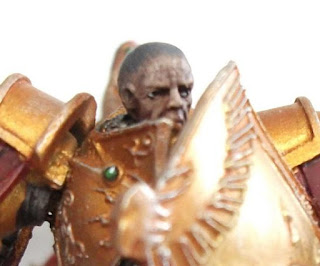