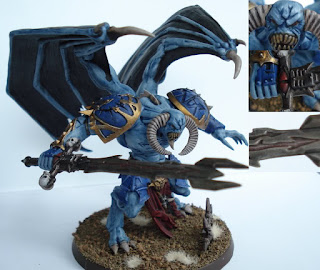 I really wanted to have a daemon prince ever since I started the hobby. After looking through a lot of online images months back I decided that I needed something to make a small unique force that I could add to my existing marines. I've gone down a road where I've sold off all of my xenos and have a large collection of marines and guard now. I've also sold off a lot of my old painting that was sub-par to my current level and worked toward having multiple 'small' armies that can work together and mix and match.
As an example, my drop pods, terminators and devastators are all Space Wolves, my tanks and assault marines are all Blood Angels, my fast attack (speeders/bikes) are all Night Hawks and someday I will have tactical marines that are all roman-esque ultramarines or custodes. I see no reason why select groups of marines would not form multi chapter forces and it actually looks cool on the table to see multiple chapters present. Of course I pick 1 codex to pull rules from at any given game and basing all of my models the same helps them mesh well.


Further to this, I really liked my space wolf conversions as it was quite fun to do and I love the look of the beefy shoulder pads. I've ordered a bunch of chaos terminators and conversion parts to make Tzeentch terminator sorcerers which will be my obliterators. I've also put together a few dreadnoughts though none have seen paint. This way, my dreadnought detatchment (see above) will be thousand sons. I dislike tentacles and spikes and the more pre-heresy look of my models will help them in this regard. I don't believe there will be any issue with my Tzeentch dreads looking good beside my loyalist marines in a battle since they're just imperial models painted to the same scheme as my daemon prince. Recent recruits right? The oblits also won't be super chaos like and also should be fine to use along-side loyalists. Giving everything (not the daemon prince) an egyptian look but not painting thousand sons scheme will also help to give the image in chaos games and not pigeon-hole me when they're substituted in. I realize some die-hards may be against this but the hobby keeps getting more expensive.

I'm really trying to work on my gold trim and I think it's a sweet contrast with blue. The wings were done with adeptus battlegrey and 2 washes of badab black which gives it some easy texture. I went pretty heavy on the washes here which seemed to turn out alright (the blue is done with astronomicon grey and a blue wash). Since I've never painted blue really (aside from a librarian) I sort of went for a really bright look. I'm not usually a fan of bright colours on 40k models but daemon flesh should stand out I think.