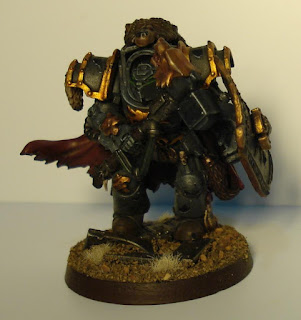 So having found myself with a Loganwing army and a land raider, I was curious why in an army dominated by Wolf Guard I hadn't yet made the special upgrade character.  Looking at my bits box, then back to a bits order in progress, I ordered a terminator body for about the cost of a paint pot.  I present my Arjac Rockfist.
I did away with the silly anvil (yes I know he is the 'Anvil of Fenris' but it looked rediculous.  A nice wolf pelt fit way better.  I sculpted the fur to join the chaos cape to the wolf head and although it gets larger, I attribute that to the big bushy mane on large wolves.  I now have someone to lead a close combat oriented unit and jump out of the land raider.  I know Logan could have, but I really like that Arjac isn't an independant character.  I also lacked storm shields in the army (if I don't want to upgrade to Arjac) and he can become a lone wolf too since I left off the anvil.  I burned through this guy in two nights and I'm finding my motivation to paint special characters is FAR in exceedance to rank and file troops.  I knew that before, but figured it wouldn't be as prominent in an all terminator army where I bothered to model everyone uniquely. 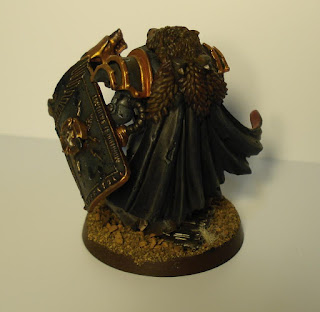 I didn't paint any lightning or glow on his hammer (I don't think I could quite capture a look I wanted and my technique for power swords wouldn't transfer well.  So I put a few washes of asuremen blue over boltgun/mithril.  I like the darker hum of power :).

*Looks down at many half painted models*
I have 6 Blood Angels assault marines that have been aching to get painted for a really long time.  Maybe I shoudl finish them but these scouts just look way more fun...
Conversion Painting Space Wolves Warhammer 40k